On a Seattle radio show this morning, Jim Mora Jr. told the interviewer that he’d pack up his stuff from Atlanta and take the University of Washington job if it were available in a heartbeat.

I’d do it, I promise you that. Now, I want to see Ty succeed, and I want to see that program succeed. But if he decides at some point that he’s ready to move on and they want me, I will be there. I don’t care if we’re in the middle of a playoff run, I’m packing my stuff and coming back to Seattle… That’s the job I want. [Host: You’d leave the Falcons for that job?] Absolutely.

Junior immediately issued an apology as soon as the comments spread around the web and sports radio.

First and foremost, I’m sorry. Despite my off-the-cuff intentions, what I said was not appropriate for my players, the Falcons organization and our fans, and Tyrone Willingham. I got too relaxed with the radio talk show host who is a former college roommate, and I got carried away with the banter.

I want every fan in Atlanta to know that my heart and passion are right here with the Falcons and winning our game this weekend.

Hmmm… that’s smart. Piss off the fans of a town that is struggling as a sports town by “joking” that you’d take a college job over their Falcons at the drop of a hat. And on top of that, every player will have to answer the question of whether their coach would quit on them… right before an important matchup against the Cowboys that has huge playoff implications. That Cowboys -3 line is looking better and better.

Here’s an mp3 of the clip where Mora discusses wanting the Huskie job courtesy of KJR radio in Seattle.

That love affair Atlanta has with Michael Vick might be coming to an end soon. You can pretty much do anything you want as a professional athlete as long as it doesn’t involve a live boy or a dead girl. Murder accessory to murder of two people? Use your cell phone to sell some drugs? Kill someone while driving drunk? Fans are willing to forget all that. But you cannot flip the fans off.

Fans can call your mother a whore and your wife a disease infested stripper (she probably is a stripper anyway), but you cannot retaliate. So when Michael Vick flipped the bird to some hecklers on his way off the field (after Atlanta’s fourth loss in a row, by the way), he got himself into a whole mess of trouble. Now, Atlanta isn’t the most passionate of sports towns but we have to imagine that running this photo over and over won’t help Vick’s current on the field struggles.

Vick did issue a statement apologizing to the fans:

First and foremost, I would like to apologize for my inappropriate actions with fans today. I was frustrated and upset at how the game was going for my team, and that frustration came out the wrong way. That’s not what I’m about. That’s not what the Atlanta Falcons are about. I simply lost my cool in the heat of the moment. I apologize and look forward to putting this incident behind me.

“That’s not what I’m about”? Hmmm… and Kramer isn’t a racist. We always knew Michael Vick was overrated, we just didn’t know he was a punk too.

In 2003: In Game 3 of the ALCS, several brawls broke out as the Yankees and Red Sox showed the world that – gasp – they might not like each other or something. In the fourth inning, Pedro Martinez threw a pitch over Karim Garcia’s head and words were exchanged. When a Roger Clemens pitch sort of came a little inside to Manny Ramirez the next inning, Manny went ballistic and both benches cleared. That’s when Don Zimmer, all of 72 years old, charged Pedro like an extremely pissed off, chubby, white, pale bull, and Pedro game him an “ole” into the Fenway Park turf. It was both hilarious and embarrassing to watch at the same time. The Yankees won the game 4-3.

In 1972: The Cincinnati Reds became the first team since 1912 to win a series when coming to bat trailing in the bottom of the ninth inning. Behind 2-1 to the Pittsburgh Pirates in the fifth and deciding game of the NLCS, Johnny Bench tied the game with a solo homer off Bob Moose. Two singles and a wild pitch later, the Reds were celebrating a trip to the World Series with a 3-2 win in the game and the series.

In 1992: Deion Sanders did double duty as he suited up for a pro football game with the Falcons against the Dolphins, then took a jet to Pittsburgh in time to join his Braves for Game 5 of the NLCS. “Prime Time” was a two-time loser that day, as Miami defeated Atlanta 21-17 and the Pirates staved off elimination against the Braves 7-1 as Deion watched from the bench. Sanders was criticized on the air for playing football by CBS analyst Tim McCarver. Neon got his revenge by throwing water on him in the locker room during the celebration after Game 7.

The kick that won the NFC

Fantasy Alert! Fantasy Alert! OK… maybe not. But Morten Andersen has rejoined the Atlanta Falcons to handle the short field goal duties. The Falcons were understandably unhappy with their current kicker Michael Koening after missing 6 out of 8 attempted in the first two games of this season. Koenen is the punter that won the FG kicking duties by being spectacular in preseason but terrible when the games actually counted.

I’m coming to a great organization with a lot of outstanding players and coaches,” Andersen said. “I plan on helping them continue to build on the success they’ve already had this season and also help out Michael [Koenen] in any way I can.

If Andersen can remain on the roster until next season, he will surpass George Blanda as the oldest person ever in the NFL, which Andersen stated was his goal. No word on whether Koenen has been sharpening his knives today.

In 2004: Texas Rangers relief pitcher Frank Francisco was arrested and charged with aggravated battery for throwing a chair in the stands. The incident started when Oakland fans behind the bullpen were reportedly heckling Rangers pitcher Doug Brocail about his stillborn son. Francisco hit a woman in the face with the chair and was suspended for the remainder of the season. He plead guilty to misdemeanor assault and was ordered to take anger management classes. He missed the 2005 season because of elbow surgery and was just recently recalled to the Rangers.

In 1981: The Atlanta Falcons tied an NFL record by scoring 31 points in a nine-minute span during the fourth quarter in a 31-17 victory over the Green Bay Packers in Lambeau Field. The early-season loss would ultimately cost the Packers a chance to win the NFC Central Division, as they finished a game behind Tampa Bay.

In 1973 Congress and President Nixon passed a bill to lift the NFL’s blackout policy. Before this, local games were not available in the home team’s city. This means that the Pittsburgh Steelers “Immaculate Reception” victory over the Oakland Raiders in the 1972 playoffs was not seen in Pittsburgh.

After losing his $100,000 workout bonus and getting fined $14,000 a day for missing camp, Ashley Lelie owes the Denver Broncos about $1.1M. For someone who will make $600,000 this year, that has to be the dumbest holdout in the history of the NFL.

Sometimes, those daily fines are waived when the player eventually comes into camp and signs a new contract. However, as part of the trade agreement, the Broncos made him sign an agreement that allows them to recoup that $1.1M and they are likely to do so to discourage others from such a foolish holdout.

Shanahan states that the draft pick the Broncos got in return for Lelie was secondary to the penaltieis.

It wasn’t really the pick as much as I just wanted to make sure that they knew whatever the prorated signing bonus was and whatever the fines were that that was going to be a hefty amount. That’s a lot of money to pay back. And when that was agreed to, then we talked about compensation relative to what we should get for his services and we were able to do that.

Good work, Ashley. You didn’t want to be a #3 WR so you got yourself traded to the Falcons to be a… #3 WR and now owe half a million. Genius.

Links:
[ESPN]: If Broncos demand all that’s due, Lelie may pay to play

We don’t know who MediaTakeOut.com is but they have an “exclusive” photo of Michael Vick “embracing” a blunt and what appears to be a herpes cold sore on his mouth. (First, “embracing a blunt”? Second, how exclusive can it be if they got the photo from a myspace profile page. Then they put their website address on it. Jesus guys, we know you want more traffic but myspace is only read by 60 trillion people. If that’s exclusive, then so is Paris Hilton’s cooch. That site is absolutely worthless but since they found the photo, we’ll follow the blogging rules. Now back to our regularly scheduled programming…)

We find this story to be hilarious not because of the blunt in his hand but because of the cold sore. We always knew the story of Ron Mexico was true but here’s actual proof. We gotta say this about Michael Vick, a little cold sore doesn’t keep him from partying, unlike, say, those guys from Spinal Tap.

God bless Michael Vick. Everytime we see the Valtrex commercials on TV, we start thinking about Vick looking confused in the pocket as Paul McGuire continues to talk about how great he is and we always have a good laugh. 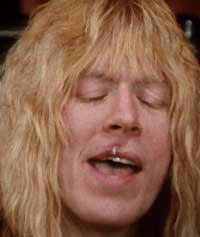 Sonya Elliot, the woman who sued Michael Vick for giving her herpes simplex II (much milder than the dreaded herpes simple ten) has settled out of court for an undisclosed sum.

This woman is one of the unsung heroes of modern sports pop culture. Without her, we would never have Ron Mexico. Without her, thousands of fans wouldn’t be able to throw tubes of Herpecin-L and make outbreak jokes at Michael Vick. What? No one throws tubes of herpecin at Ron Mexico? That’s just a wasted opportunity.