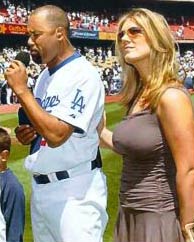 Very nice… how much?

We’re trying to ignore it as much as we can but Barry Bonds is inching closer to Hank Aaron’s homerun record and he’ll likely break it next season if he decides to play. Well, today, the owner of the Giants said that he’s going to delay making a decision on Bonds until the end of the season. Now, it’s unlikely that the Giants won’t resign him if Brett Favre Barry Bonds wants back in but what if… what if the Giants didn’t resign hi and nobody else in the league stepped up. That’s one way to end his home run chase.

[ebay]: ebay fun: dress worn by Jose Lima’s wife up for auction. “It is 13” across at the bust. Obviously, there is considerable stretch and give in this material.”

[Deadspin]: Remember the SNL skit saying you could hire the Black Eyed Peas for your bar mitzvah? Dead on. Is there anything these guy won’t do for a buck?

[Railbird Central]: Hey look, a record crowd got to see how washed up Brett Favre is. (Yes, we realize that’s the second shot at Favre this post.)

[There’s your Karma Ripe as Peaches]: Mrs. Manning is not doing her son Peyteypie any favors