In 1971: Joe Frazier handed Muhammed Ali his first professional defeat in a 15 round decision at Madison Square Garden. It was the first of three classic matches between the rivals, and it was the first time in history that a fight featured two undefeated champs (Ali was stripped of his title for refusing to go to Vietnam). It was simply dubbed “The Fight of the Century.” It lived up to its billing, as the two battled into the fifteenth round. Referee Al Mercante later claimed that Ali (who predicted he would knock Frazier out in the sixth) gave away many rounds. Most who watched, however, found that it was hard for Ali to “give away” rounds when he was being mercilessly pounded in the corner by Frazier, who sent Ali to the canvas in the fifteenth. Ali survived the knockout, but Frazier won comfortably on all three cards. The fight was one of the most hyped events in sports history, with over 700 press credentials awarded (and another 500 turned down). There were even some celebrities who couldn’t get good seats, but Frank Sinatra smartly got the best seat in the house, snapping pictures on the ringside apron as a photographer for Life Magazine.

In 2004: The National Hockey League officially erased any doubts about its “The U.S. media only talks about hockey when something bad happens” status with one of its ugliest incidents in years. Wanting revenge for a hit by the Colorado Avalanche’s Steve Moore which knocked out star player Markus Naslund three weeks before, Vancouver Canucks forward Todd Bertuzzi came up to Moore from behind and punched him on the side of the head. Moore was knocked out immediately, and he fell face first to the ice. It didn’t help that all 245 lbs. of Bertuzzi fell right on top of him. It didn’t help any more when three other players piled on top of them. Moore suffered a broken neck, a concussion and severe lacerations on his face. Three days later, Bertuzzi was suspended for the rest of the season (including the playoffs) and would not be reinstated until after the lockout in 2005. The atmosphere in Vancouver’s GM Place was ugly that night, as the Canucks vowed to get even with Moore (who did fight earlier in the game). But, as Rogers Sportsnet announcer Jim Hughson said, “the score settling has gone too far.” Bertuzzi later plead guilty to assault and received probation. Moore has also attempted to sue Bertuzzi for over $15 million in lost wages and damages and has still not played a game since. 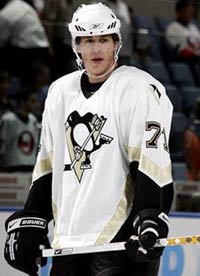 1. Malkin: A Part of History
We said it a couple of days ago — but after another amazing game, it bears repeating again: This kid is good. Last night against the Los Angeles Kings, Evgeni Malkin became the first player in 89 years to score a goal in his first six games, beating Dan Cloutier with a pinpoint wrist shot. Three other NHL players accomplished this feat, but they did it all the way back in the inaugural 1917-’18 NHL season. Malkin is still less than halfway to the all-time record of first 14 games with a goal, but talk about finding your groove… Malkin is just tearing up the ice.

He was not content with just one goal, however. In overtime, he hit the twine for the seventh time to give the Penguins the 4-3 victory. It will be interesting to see if Evgeni can keep it up – if he can, the NHL will have something very, very good on its hands.

2. Bringing Him Back
Less than two weeks after giving him the boot as head coach, interim GM Paul Holmgren is welcoming Ken Hitchcock back to the Philadelphia Flyers. His role with the organization, however, will be quite different – he was hired this time to work as a pro scout instead of working behind the bench. Our thoughts? Hitchcock better be pretty darn good at scouting, because the Flyers need the best that they can get at this point. People within that franchise must firmly believe in Ken to bring him back aboard this mess so easily, which prompts the question – why would they have fired him in the first place? Keep him within the organization, and protect yourselves from all the drama of his firing. With all of the shenanigans, the only thing we truly know is this: the Flyers are not that good, and they need quite a miracle to help right the ship.

3. On Todd Bertuzzi
Florida’s veteran winger made some headlines this week, announcing that he’s considering surgery on his lower back. This isn’t the first time folks in Colorado have heard about Todd, because here, everyone believes that his back isn’t the only thing that needs fixing.

It seems nobody who is a fan of the Avalanche has decided to forgive Bertuzzi – in 2003, he put a blatant hit on Colorado’s Steve Moore, cracking his vertebrae and giving him a severe concussion. The check from behind was shown over and over here in the Rocky Mountain area, and was extremely hard to watch. Moore’s head hit the ice hard, and fell in an awkward position. What ensued was a long period of silence, as Moore lay motionless on the ice, simply unable to move. Bertuzzi was suspended for an extended period of time, but then reinstated at the beginning of the 2005 season. The common consensus here is that Bertuzzi should not be allowed to play for as long as Moore is out, which probably means that Todd’s career would be over. Moore has not been able to get back out on the ice, and is now a schoolteacher.

It is also interesting to note Todd Bertuzzi’s Wikipedia entry. For a guy who happens to be a really good hockey player, it is sad to see that this incident covers the entire page.

Check It Out
NBC Sports’ “The Bellowing Moose” investigates the recent effect of fights in the NHL.

Game of the Night: Vancouver at Minnesota
Wild: 7-0-0 at home this season.