Before the second half of the MLB season begins, why not remember the first half in style? Set to the tune of Bon Jovi’s greatest hits album, here’s the season’s memorable moments thus far. Are you ready to rock!?!

Lay Your Hands on Me: Boston Red Sox-Tampa Rays — The fight of the first half goes to these two teams. We’re still wondering what would’ve happened to Coco Crisp had James Shields connected on his haymaker.

Wanted Dead or Alive: Willie Randolph — We still don’t know for sure if it was the owners (The Wilpons) or the GM (Omar Minaya) who wanted Randolph out, but when you fire a guy who has won three of four and is on the first game of a West Coast trip at 3 a.m. Eastern time, you wanted blood however you could get it.

Keep the Faith: Detroit Tigers — The Tigers started 0-7 and it took them until June 30 to have a winning record. They’re still just one game over .500 and seven games behind the White Sox, but they’ve at least climbed out of a huge hole.

I’ll Be There For You: Francisco Rodriguez — K-Rod has 36 saves to lead the majors. The next highest total is 27.

Runaway: Evan Longoria — No player has a postseason award locked up more than the Rays rookie third baseman.

Livin’ On a Prayer: Chicago Cubs — Is this the year the drought finally ends? We all know about the curse of the Billy Goat and Steve Bartman. Cubs fans are praying this is the year those things are put in the past. They’re halfway there.

Blaze of Glory: Arizona Diamondbacks — The club got off to a 20-8 start. They’re now 46-46 and hold a one-game lead over the Dodgers in the NL West. We’d say that was going down in a blaze of glory.

It’s My Life: Josh Hamilton — We all know about Hamilton’s unbelievable comeback. He was consumed by drugs and was headed toward death. Now, he’s an MVP candidate who has a whopping 91 RBIs. The opening to this song’s chorus fits the Texas slugger perfectly: It’s my life/ It’s now or never/ I ain’t gonna live forever/ I just want to live while I’m alive.

Bad Medicine: Ryan Church — The Mets outfielder suffered a concussion on May 20 (his second of the season) has been sidelined by postconcussion syndrome on and off for almost two months. The Mets have been accused of not handling the injury properly and now the players’ union is getting involved.

You Give Love a Bad Name: Alex Rodriguez — This pretty much sums it up.

Never Say Goodbye: Barry Bonds — As teams try to figure out how to make that second-half surge, whose name has come up a few times in recent weeks? Bonds. Barry Bonds.

Have a Nice Day: Blue Jays manager John Gibbons, Mariners skipper John McLaren and the aforementioned Randolph all got their walking papers within four days of each other.

Who Says You Can’t Go Home: We couldn’t think of a good one for this song so we want you to submit some choice via that form to your right and we’ll post a couple later on.

[The Bad News Bloggers]: This year’s top fantasy RB probably isn’t who you think it is (pssst, it’s Brian Westbrook)

[The Beardown]: A note to Bud Selig

[NewsObserver.com]: The Pack is back We love how the station goes with the informative yet humiliating approach to this piece.

[Awful Announcing]: Wait Guys! There’s Something Wrong With The Banner …….. Oh No…..

You might think that NBA cheerleaders are just hot bodies gyrating in tight spandex outfits, but you’d be wrong. It takes a whole lot more than just a pretty face to make in the pros. These chicks are tough. Well, at least this Jazz cheerleader can take a wallop.

Wow, the last time we saw a member of the Jazz involved in a collision like that was when Karl Malone tried to decapitate Isiah Thomas in the early 90s.

Who could say “no” to these chicks?

We told you about the 2007 NBA Dance Team Bracket a few weeks ago, which is a playoff style competition between cheerleaders from around the league to determine who the fans favorite dance team was. Or, it could be described as what it really is, which is a contest to determine exactly which city sports the hottest babes in the least amount of clothes.

Not surprisingly, the masses went with the tanned and toned ladies of Miami for the second year in a row. And the repeat performance was even sweeter than last years title as the Heat dancers were never even challenged on their way to the trophy. In the Eastern Conference finals, the hotties from South Beach blew away the Raptors dancers by receiving 62 percent of the vote. Then in the finals Miami knocked off the West champion Rockets with 61 percent of the vote.

The way we see it, there are no losers in the tournament. In fact, Miami might have won the crown but we know that the true winner in this playoff is the entire male population. But if you go by the numbers, then the Los Angeles Clippers have the most unfavorite team in the league because they got bounced in the first round after receiving only 16 percent of the vote. Still, in our opinion, there’s not one dancer on that squad who is lacking lovely lady lumps.

I’m sorry; you were saying?

So, somebody out there in TV land isn’t too thrilled with how some of the major television networks portray women during their sporting telecasts, and now the FBI is offering $5,000 to find out who it is. Dozens of letters criticizing the practices of TV crews and cameramen were sent to national networks and their local affiliates, and some were sent to the athletic departments of Ohio, Michigan and Arizona. Some of the letters even contained an insecticide within them. Apparently, this pissed off fan thinks that camera crews objectify women, especially cheerleaders, and that they have a tendency to focus the lens on the young ladies, ahem, most popular assets.

Here are some excerpts from this raving lunatic’s threatening letters of disapproval.

For the past 6-7 years, ESPN and its nationwide networks have exploited cheer/dance teams all across the country. They do this by parking their TV cameras on these women for their own personal entertainment.
…
Pigs park their cameras on us close up, front view, dozens of times each game, yet rarely ever show on TV in this manner.
…
We have asked nicely for them to respect us and all women, yet they refuse. They exploit innocent people, so we will too. When they start respecting us, we stop mailing these out.
…
For the last 6 years, Ohio State cheerleaders have received more TV time than any other Division 1A cheer squad on ESPN, because they wear long sleeved red/white outfits. If they wore sleeveless outfits, they would not get ANY TV time. So, we are fed up with this constant exploitation.

For a second there, the perpetrator made a bit of sense talking about how “pigs park their cameras on us,” because we all know that men are really dogs are heart. However, this nut lost all her credibility when we found out that in one letter she complained about the sexist manner in which WNBA players are portrayed. Listen, we’ll admit that cheerleaders probably do get exploited when they wear their little outfits, but nobody in their right mind is checking out the WNBA horses as they gallop up and down the court. Hell, do any men even watch the WNBA? Didn’t think so, case closed. 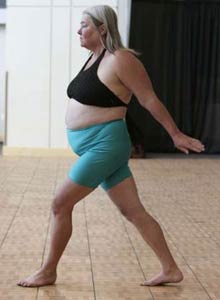 One of our readers sent in this photo from the Denver Broncos Cheerleaders tryouts. No, seriously.

Now, we have nothing against fat people but they really shouldn’t be wearing spandex. We’re going to go ahead and guess that this is some feminist social commentary on using overly thin women who create body image issues for “normal” women to sell sports. Either that or someone is suffering from a OJ Simpon-sized case of self delusion. (Or perhaps she is a cautionary tale to the cheerleaders who love buffalo wings.)

Needless to say, she did not make the squad. For a slideshow and video of the Denver hotties that actually made the squad, check here. (Yes, yes, and yes.)

Thanks to rux for the heads up.