Ever wonder what the best basketball players in the world are doing when timeout gets called? You might think that they’re focused on the Xs and Os being diagramed, but you’d be wrong. Apparently, they do the Soulja Boy; whatever that is.

[The Big Lead]: Baron Davis, Quite the Comic

1. It’s getting hot in here
The series between Dallas and Golden State just keeps getting better and better as the rivalry grows bitterer and bitterer with every dribble of the ball. In game two we saw some real fire between the clubs in a very physical session that was littered with enough trash talk to fill a city dump. And in the end it was the Mavericks who walked away with a 112-99 victory and tied the series at 1-1. Baron Davis got ejected from the game at the end of the third quarter for clapping sarcastically at a call, which basically ended the Warriors chances of leaving Big D with a two game sweep in hand. Then Stephen Jackson took his sweet time leaving the court after he got ejected late in the fourth and gave the refs a nice sized piece of his mind on the way out. But just wait until an arena full of blood thirsty Warriors fans provide the backdrop for a big time game three that could swing momentum into the direction of either team. Hopefully there won’t be any suspensions handed out for the Davis and Jackson incidents or for a brief skirmish that broke out during the third quarter. Maybe all this bad blood stems from the Don Nelson connection but who cares how it originated, it’s producing some freakin’ exciting ballgames; even the one’s that are 13 point blowouts.

In a pretty shocking move, the Pacers decided to axe their coach after the team suffered through a dreadful second half of the season en route to a 35-47 record. Indiana had a horrible season, their worst since 1988-89, and has gotten gradually worse every year under each of Rick Carlisle’s four years. But don’t expect this to be the last thing you hear from Indy this off-season because a complete overhaul could be in store for the Pacers. Stephen Jackson was already traded away and Jamaal Tinsley and Jermaine O’Neal probably aren’t too far behind. Larry Bird is a hardcore winner and he will do anything to get his fix, so a blockbuster deal for Kevin Garnett or Pau Gasol could definitely be in the cards. And, well what do you know; Larry Brown is suddenly interested in coaching again.

3. Gimme that game back!
San Antonio was rolling to an easy victory as game two of their series with Denver entered the fourth quarter but the Spurs almost let a late game slip cost them the victory. With 7:16 remaining in the game, San Antonio grabbed a 17 point lead, 84-67, but by the time the clock struck the 45 second mark, the Nuggets were within three points, 88-91, of a 2-0 lead over the three time champs. But the Spurs held on and evened up the series 1-1 after ripping off six unanswered for a 97-88 victory. The defensive focus was targeted on Denver’s duo of Carmelo Anthony and Allen Iverson after they torched SA for 61 in the first game; in game two they were held to a combined 46 points on 46 shots. This series will be rockin’ in the Rockies on Saturday when these two hook up for game three.

Buzzer Beater: Earlier this week, Kobe Bryant made an interesting statement when asked about the window closing on his career. He responded by saying “We definitely have to get to that elite level. And we have to get to that level, like, now.” Bryant has been a winner for most of his career and you know that he is just praying for a Shaqless championship ring to go on his pinky finger, so getting bounced in the first round every year is probably not going to cut it for league’s best scorer. Without executing a serious roster overhaul, the Lakers will never reach that “elite level” that Bryant speaks of considering that Dallas, Phoenix, Utah, San Antonio and Houston don’t look like they’ll be giving up their spots any time soon. So, would Kobe consider leaving Tinsel Town for a more championship conducive environment? Hmmmmm. 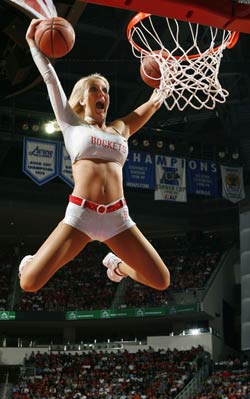 1. Home-court disadvantage
Most teams won their home games when the opening round of the playoffs began this weekend, but there was a trio of teams who failed to please the fans inside their own gym and they are now looking to crawl out of a 1-0 hole. New Jersey grabbed a victory from a very inexperienced Raptors team in Toronto, but that wasn’t all that surprising. What was really shocking was that Denver and Golden State took advantage of a couple of Texas powerhouses by utilizing some great games from their stars. Carmelo Anthony and Allen Iverson combined for 61 of the Nuggets 95 points against SA, while Baron Davis, Jason Richardson and Stephen Jackson hooked up for 69 of the Warriors 97. These series aren’t even close to being over but for the clubs that dropped game 1 at home, their next game is pretty darn close to a must win.

Nobody in Minnesota is talking, but rumor has it that Kevin Garnett is talking with the Timberwolves management about getting a contract extension. Why, KG, why?! Garnett seems to be the only person, besides the organization and their fans, who is content with him simply wasting away the remaining years of an incredible career as the big brother for a revolving door of lottery picks. Open your eyes Garnett; you might want to think that you can turn this team around but you can only do so much with the garbage that Kevin McHale surrounds you with. Garnett is signed through next year, then he’ll become a free agent, but we suggest that he faces the truth and forces a trade. He might not even have to go very far; the high-priced Jermaine O’Neal is need of a change of scenery as well.

3. Suns are too hot to handle for LA
Kobe Bryant tried to carry the Lakers on in game one of their series against the Suns, and it worked for about three quarters. That’s when the weight became too much, and Phoenix’s team ball offered too many solutions for problem posed by Bryant’s one man show. Bryant had 28 points in the first half but was then limited to just 11 in the second and, if that’s not devastating enough for LA, the team only scored 10 points in the fourth quarter. Phil Jackson said that his superstar “ran out of gas” down the stretch as he went 1-for-10 during the final 12 minutes. The odds are already stacked against the Lakers, but if Bryant can’t be stellar in this series then they won’t make it back to Phoenix.

Buzzer Beater: Just one game into the post season and Shaquille O’Neal is already complaining about the refs. And he’s not doing it quietly either. “My intention was to come out and be myself, until Eddie Rush derailed me,” said O’Neal. Shaq seems to feel that Ben Wallace was dropping like the flop king Vlade Divac and so he’s going to retaliate in the only way he knows how; by crying. Considering that he’s the biggest, baddest kid on the block, the Daddy sure does whine like a spoiled brat every time he doesn’t get a call. Sad thing is that his rant will probably change the way things get called in the next game. Now it is going to be up to Wallace to adjust his game accordingly or he’ll be the one watching the end of game 2 from the bench, instead of O’Neal.