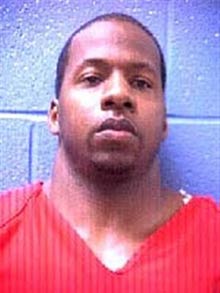 Being on the practice squad must suck. You make about $5000 a week (which isn’t bad for normal people but sucks in comparison to the players on the real team), you are largely ignored by everyone, and on top of that, you have a hard time keeping a straight face when trying to pick up chicks with the “I’m a professional football player” line.

On the flip side, you still are playing football for a living. So it always surprises us when a player will throw away his chance at a football career by trying to make some quick cash or doing something stupid. This week’s “winner” is Bryant McNeal of the Oakland Raiders. McNeal was arrested yesterday on an outstanding December 2005 warrant for selling a Land Rover for $15,000. Because he was craaaazy for selling it at such a low low price? No, because the car didn’t actually belong to him.

McNeal is also accused of writing a fraudulent $1,500 check to Berger Dental Group. Well, at least he’ll have a nice smile when he takes your order at the local Burger King.