We’ve always known that Gilbert Arenas was a strange cat. A really strange cat. The dude has absolutely no filter and never feels an ounce of shame for the words that come out of his mouth. In a way, it’s admirable and shows a level high level of self confidence and comfort with himself. On the other hand, when someone will say anything about anything to anyone it can be more than anyone really wants to hear. And we’re not just referring to boring plans for his birthday plans.

When I was new in the NBA the team veterans convinced me to shave, you know, down there, because they said the hair stinks. I used my girlfriend’s razor, which was rusty and gave me keloids. The doctor prescribed medicine to dab on, but I just poured it all over. Three days later I woke up screaming. The skin was burnt off my scrotum, down to my crack, everything — just raw flesh. I still had to run and play, so I used a numbing spray for a month until it healed. Now I use clippers.

Woke up screaming three days later, huh? Why do we get the feeling your honesty is going to have the same effect on us? 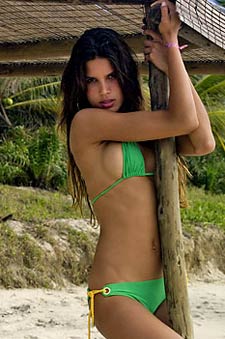 We thought SI was trying too hard and making a mistake by putting Beyonce on the cover. Now we see they are trying to even harder with this new Swimsuit photos in 3-D business. By layering pictures, they are creating a 3-D effect. Hot models in 3-D? Sign us up! But the technology is really poorly done. All that happens is the reader just ends up with a moving blurring photograph that sucks. Stick to the basics, SI, that’s what got you $35M in ad revenue for the swimsuit issue in the first place. Check out Slate’s Intellectual History of the Swimsuit Issue. (Oh by the way, nice ipod.)

[The Big Lead]: Sacramento State Girls Know How to Party (Well, the Soccer Team Does)

[Knickerblogger.net]: All Star “Snubs” – An Exercise in Intellectual Laziness

And finally, we have two wrestling stories. First is a good one about a wrestler with no legs who is kicking ass in Missouri. The second… well, just watch the clip below. (We don’t know what the hell is up with the audio.) 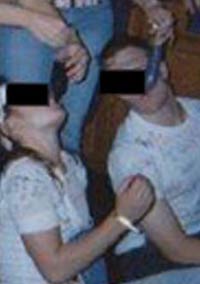 Was it George Carlin that said “There are 10 things men should never do and cheerleading is 9 of them”? From BadJocks.com comes these year old pics of some Indiana University of Pennsylvania cheerleading squad hazing ritual that prove being a male cheerleader is just not right.

Here’s a word of advice to potential male cheerleaders (and, well, everyone else): Every single photo or video that you’re in has the potential to wind up on the internet. The more embarassing it is, the more likely it’ll end up on the net. So think before you take that photo. Are you trying to be ironic? Just kidding around? Nobody cares. It’s out there. So while this guy knew it wasn’t a good idea to participate in this event, it looks like the need to be a cheerleader (I GOT SPIRIT, YES I DO, I GOT SPIRIT HOW BOUT YOU!) overrode his common sense. And well, now there’s a pic of him sucking on a condom. His parents must be so proud.

By the way, we’d like to point out that our objection of male cheerleading isn’t because of the stereotype that male cheerleaders are gay (hey we love Michael Strahan!) but because it’s just so incredibly LAME.

In a statement released to the Northwestern community, the womens soccer team issued an apology for the hazing incident that brought them unwanted national attention.

To the members of the Northwestern community,

We, the Northwestern women’s soccer team, apologize for the negative attention, press, and controversy our alleged hazing incident has caused the University. We never foresaw that what began as a well-intentioned night of team unity and celebration would have such severe consequences, and we are embarrassed that our actions have become the source of such harsh criticism.

We fully accept responsibility for our behavior and understand the magnitude and severity of the current situation. As Northwestern varsity student-athletes, we take extreme pride in representing this school, and this incident does not reflect the values, integrity and qualities we seek to embody.

We hope this incident has not resulted in a breach of trust. From here, we will move in a positive direction toward reestablishing our relationship with the Northwestern community. Let this be a learning experience not only for the women’s soccer team, but for all Northwestern groups, organizations and teams who wish to uphold the honor and prestige of this university.

In addition, we extend our apologies to teammate Kelly Sitkowski, who had absolutely no role in the incident and was not present that evening.

This is your standard apology statement but at least they didn’t pull the old “we apologize to anyone who might have been offended” non-apology most athletes issue.

It’s always amusing when you have to assure people that light bondage and girl on girl action doesn’t embody your values and qualities. (Not that there’s anything wrong with that.) But the best part of the statement is the apology to the teammate that wasn’t there and still had to answer questions from her friends and family all the time. This is like Duke lacrosse apologizing to Devon Sherwood for being black.

Badjocks.com posted photos from 12 college team initiations and now the fun is over for everyone. Three more colleges, Quinnipiac, Kenyon, and Catholic University are investigating whether the photos are evidence of hazing taking place.

We don’t promote or condone making people do things against their will but a little underaged drinking and strippers isn’t really that bad. As long as there’s no sticking fingers in players rectums, what’s the harm in a little team bonding?

We have to give credit to Quinnipiac for not overreacting in the wake of the Duke lacrosse scandal.

John Morgan, a spokesman for Quinnipiac — which had pictures purporting to be of some baseball team members dressed in women’s underwear posted — said: “We’ve seen some pictures that have come to our attention, but it’s not clear to us that our baseball players are involved in anything that raises concerns. We’re looking into it.

God bless the internet. Badjocks.com runs a bunch of pictures of a hazing incident involving the womens soccer team at Northwestern and that’s how school administrators and parents find out about it. School officials have confirmed that the pics were indeed of the womens soccer team but could not ascertain when the hazing took place but thinks they are from last August because that’s what the website reported.

Northwestern AD Mark Murphy has suspended the team indefinitely and are looking to see if the allegations of hazing are true. Hmmm… if those pics aren’t of a hazing, we’d like to know what team activity involves being stripped to your underwear and having your hands tied behind your back. (Besides the Abu Ghraib softball league that is.)

Let us remind you that the investigation into the Duke lacrosse scandal by school officials came as a result of an overheard conversation. Do school administrators have any idea whats happening on their campuses? I’m sure they are shocked, shocked! to find that underage drinking occurs on their watch.

Finally, a note on the media. First, since they won’t ever paint outside the lines, we have to rely on good ole internet blogs to post actual photo goodness of the event. Second, the Chicago Tribune said, “Badjocks.com seeks to expose abuse of athletes.” Hah! We love badjocks… but precisely because their whole bread and butter is showing us what some stupid athlete has done today. The Chicago Trib seems to be under the impression that Badjocks is some sort of sports version of Amnesty International. 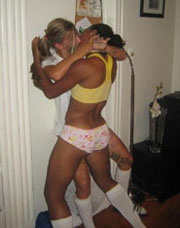 Somehow, soccer players either are the biggest hazers in college sports or they are the ones most likely to post their photos in a public forum. Bad Jocks once again has found more hazing photos, this time from the Northwestern University Women’s soccer team.

The freshman [were] not only blindfolded but with their hands tied behind their backs with athletic tape. On top of that, the girls are seen doing calisthenics and what appears to be forced drinking, performing skits that appear to require simulated sex acts, and then the losing skit team being forced to perform lap dances.

And then Bad Jocks decides to go the serious route and do some sort of dissertation on hazing in college sports. Hmmm… let us save you the time and PhD mumbo jumbo and break it down for you. A lot of organizations haze their incoming members. Most of it is humiliating, as is the requirement of hazing. However, sometimes, it’s really gay. And when it’s really gay is when people stand up and take notice. And because this is the womens team and not the mens team, more guys will take notice. Guys in underwear and tied together? Man, we’re horrified. Girls in underwear and kissing each other. Man, we’re … sweet. Hey look, we don’t make up the rules. 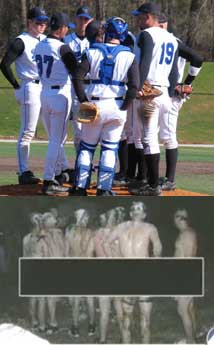 Being the catcher sucks.

I guess like celebrity deaths, homoerotic hazing rituals come in threes. First, there were these two incidents, and now Limestone College in South Carolina has disciplined 34 players on their baseball team for a hazing incident. The Saints also had to forfeit three games.

Reports described players wearing boxers or jock straps, then being covered with chocolate, molasses and flour. Some players also were given hair cuts.

Jockstraps, chocolate, molasses and flour? I believe that’s called Halloween in the Castro. And I don’t even want to know what kind of haircuts they were given.

I assume that jocks are sports fans. And I assume that some of you will read this entry. For the love of Peter Griffin, please stop this hazing. Unless you’re gay. Then by all means, carry on.

Sorry I don’t have the actual photos for you. But you know what? I’m not gonna look that hard for them either.