In 1973: In a tennis exhibition match at Houston’s Astrodome, Billie Jean King defeated Bobby Riggs in straight sets. Many viewed it as a milestone in women’s sports, despite King being the top-ranked women’s player and Riggs being 55 years old. Riggs defeated Margaret Court, another highly ranked player, earlier in the year.

In 1927: Babe Ruth of the Yankees hit his 60th homerun of the season. The Babe broke his own record of 59, set in 1921. His record would stand until 1961, when Roger Maris hit 61. Maris’s benchmark stood until the late 1990s, when several players eclipsed 61 numerous times.

In 1987: In a game against the Giants, Walter Payton of the Chicago Bears broke Jim Brown’s record with his 107th career rushing touchdown. “Sweetness” broke the record in 12 years and retired following the 1987 season. Emmitt Smith of the Cowboys now holds the record with 164. Payton was inducted into the Hall of Fame in 1993 and sadly died in 1999. 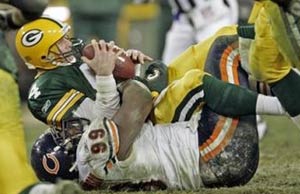 A furniture store owner near Chicago named Randy Gonigam offered customers a refund on their furniture purchase (up to $10,000) if the Bears shut out the Packers last weekend. Well, a score of 26-0 later, 206 customers got their purchases for free. The total given in away in free furniture was around $300,000.

Gonigam didn’t actually expect the Bears to shut out the Packers but he took out an insurance policy on the contest giveaway “with a company that specializes in insuring prize reimbursements.” The degenerate gamblers that we are, we wonder if the insurance was really just a $10,000 bet. The odds of the Packers getting shut out have to have been around 30-1.

This is really a smart marketing ploy. We can see this kind of thing happening at car dealerships. Think of something that is a longshot of happening (like no INTs for Brett Favre or Fred Taylor not getting hurt this year) and then offer a refund on a purchase if it comes to pass. It’s not like anyone can return a car.

In 1993: Long Beach (CA) became the first U.S. team to repeat as Little League World Series champs with a 3-2 victory over Panama. Only South Korea and Mexico have won back-to-back titles. Long Beach was led by Sean Burroughs, a future first-round draft choice of the Padres (1999) and the son of former major leaguer Jeff Burroughs. (baseball library.com)

The New York Mets made one of the silliest draft choices in baseball history when they selected pitcher Kirk Presley with the eighth pick in the first round. Although they paid Presley a handsome $960,000 bonus, he never made it out of Single-A. The Mets passed on players such as Billy Wagner, Derrek Lee, Jason Varitek, Chris Carpenter and Torii Hunter to select a distant relative of Elvis Presley. They eventually paid Wagner $40 million to sign as a free agent in 2006. (baseball-almanac.com)

In 1942: The Chicago Bears defeated the NFL All-Stars 21-0 before 75,000 fans in the New York City . As a precursor to the modern day Pro Bowl, the popular exhibition pitted an NFL team against a collection of pro players from other teams. In later years, NFL teams would play a team of college all-stars. The games were very competitive (despite this lopsided score) and drew large crowds, including some over 100,000. (footballsearchengine.com)

Look at Kyle Orton’s face in the first photo. He looks absolutely bored. (Yes, that’s if you can focus in on Orton’s face in that photo, we understand that might be hard to do.) Come on dude, check out the ass or something.

Here’s a note to athletes: whatever you think is funny ends up not being funny when it ends up on someone’s facebook or flickr account. Mere mortals like us can do stuff like that but when you’re the backup QB for the Chicago Bears (well, that is until Grossman’s season ends with the inevitable injury), you should probably want a no cameras policy.

Photos are from “Kissing Suzy Kolber“. This is our first exposure to the site so we’re not sure if the blog name is ironic or not. Frankly, it sounds like a punishment.