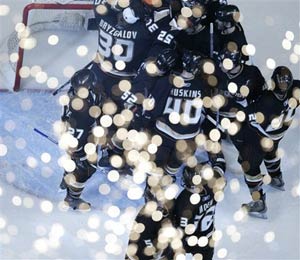 See, Jean Sebastian Giguere had a rough final period – allowing three red light specials to the Wings – but he was stone cold lights out for the first two periods, when nothing got past him. Hasek was pretty much the reverse, but in the end, the Ducks still won (with help from a Samuel Pahlsson goal). Whether or not this means the adage “It’s not how you start, it’s how you finish” is something that’s complete bollox, I’m not ready to say just yet.

What I am ready to say is this: the Cup Finals are set, and it’s Anaheim vs. Ottawa. Anaheim was here four years ago, when they lost to the Devs in seven. Ottawa has never been here, at least not in their present, since-1992 version.

The series is boring for this reason: small markets. Anaheim is 10th in the state of CA alone, and Ottawa is 4th in Canada. People will consistently use that argument to prove no one cares (meanwhile, if Cleveland somehow stuns Detroit, the NBA Finals would pit Cleveland against San Antonio, which has to be equivalently disastrous markets).

The series is interesting for this reason: Ottawa’s first line has been incredible during these playoffs. Hell, it’s been just about the only thing Ottawa is doing really well (besides Ray Emery). Anaheim has the personnel to really rumble with that line, and maybe even create a few fights in the process. That’s going to be the Ducks’ big advantage; dudes like Pronger might just level dudes like Spezza as the series winds on.

Depending on how you view the Angels of baseball geographically, you might think that neither Anaheim or Ottawa has had a major sports championship in quite some time. It’s also interesting for that reason: two “fringe” sports communities battling for arguably sports’ most renowned hardware. Y’all ready for this? We’ll be back Thursday with a detailed preview and prediction in this very spot.